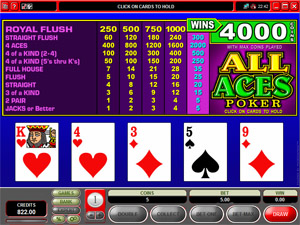 When it comes to video poker there are a number of variants on offer at the various online casinos. Microgaming powered online casinos like UK Casino Club offer players the All Aces Video Poker game. The All Aces game adds to traditional video poker games by expanding the Four of a Kind hand ranking while also offering higher payouts. In order to compensate for these, other payouts on the standard video poker paytable are adjusted negatively in order to ensure that the average return to player does not exceed 100%.

Here will take a look at the All Aces game and compare it to the popular Jacks or Better game which is generally seen as the traditional video poker variant in order to illustrate the differences this game offer players and also how to adjust your game play strategy accordingly.

Both games make use of the standard Microgaming video poker paytable wherein payouts are listed for every five coins bet in the game. The games also share the same hand rankings, with the exception of the "Four of a Kind" hand. While Jacks or Better has a single ranking for the Four of a Kind hand, the All Aces game has three separate rankings for it.

The first is four Aces while the other two are four of a kind comprised of cards from two to four and the second being made up of cards ranked from five to King. In the All Aces game, each of these 3 hands pay out 25 coins more than the Jacks or Better single Four of a Kind hand. The highest possible payout amounts to a considerable 400 coins, which in this game is higher than even the straight flush, and a Four of a Kind from cards valued at 2 through 4 payout 100 coins and four of a kind made up of cards valued five to Kings pays out at 50 coins.

As mentioned earlier, other hand values are lowered to compensate for these higher Four of a Kind payouts and these are as follows:

These declines may seem small in comparison to the hugely altered payout for the Four of a Kind hands, but it is important to remember that these combinations will occur more frequently during general game play. These changes overcompensate slightly for the increased Four of a Kind payout, this means that the Straight Flush payout increases by 10 coins from 50 in Jacks or Better to 60 in the All Aces game. At the end of the day, the average return in the All Aces game is fractionally higher at 99.91% in comparison to the 99.54% in the Jacks or Better variant.

Like other variants, All Aces video poker offers player the double option which allows for doubling the payout after every win.