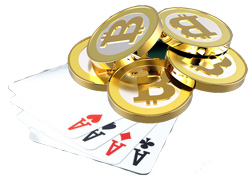 Bitcoin has had a short but explosive existence on the internet with many people using it for a number of online transactions. It is no surprise that Bitcoin gambling has too become an option and is favoured by those who live in parts of the world where online casino payment transactions are an issue.

Bitcoin transaction costs are non-existent and currency conversion rates are very low. Additionally, once you transfer coins to someone there is no way of requesting them back when returning goods or cancelling a service. This is an advantage for casinos because it eliminates charge backs which lowers risk and overhead costs.

Another benefit to any online gambling operation is that there are no Bitcoin related gambling laws in place which allows online operators who accept Bitcoin gambling to operate under the guise of offering gambling for "virtual currency" instead of real money as a way to circumvent existing online gambling legislation in countries like the US where online gambling legality is still hotly contested in most states.

But in spite of the benefits to players and online casinos alike and Bitcoin currency being touted as "revolutionary" for online gambling, the majority of licensed and regulated (read trustworthy) online casino still do not offer Bitcoin gambling. This may seem odd but there are actually some very good reasons for this.

The first and primary reason for legitimate online casinos not accepting Bitcoins is that Bitcoin fails to meet the criteria of a viable currency due to its volatility. According to a recent report by Goldman Sachs, Bitcoin's volatility rate is at around 108.1% in comparison to most major currencies which float below the 5% mark. That is quite a considerable difference and one can clearly see the risk of holding a currency that may be worth proportionally more or less from one day to the next.

Another reason is the question of legality when it comes to accepting Bitcoin gambling. Licensed and regulated online casinos work very hard to retain their licensing and this means complying with various laws as set out by their governing bodies and avoiding any grey areas.

This means that online gambling establishments that advertise accepting Bitcoins are probably not the kind of casinos you want to be playing at - or at least that's how it stands for now. So instead of being caught up in the Bitcoin casinos hype, rather play for real money that is processed in a legitimate manner until such time as regulated casinos like those advertised on our site begin to accept Bitcoin.

This way you will always ensure your own safety and security as well as enjoyment when playing at online casinos and avoid any nasty surprises.