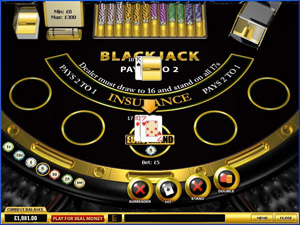 The rules in a given blackjack game will depend on the variant you are playing and where you're playing it as blackjack rules vary from one casino to the next. The rules of a particular game will also dictate your blackjack strategy.

The objective in any game of blackjack is to beat the dealer's hand without busting (i.e. going over a total card value of 21).

Card values are assigned given on their face value (2 to 10 as indicated on them), with Face Cards (Jack, King and Queen) having a 10 value. Aces are worth either one or 11, whichever you need to help you to build a stronger hand.

In a blackjack game, each player as well as the dealer is dealt two cards. One of the dealer's cards remains face down until the hand is complete. During game play, players are given the option to "Hit" in order to receive another card, or "Stand" to keep their current cards and end their turn.

Players also have the option of doubling on certain hands, in this move you bet value is doubled and you receive an additional card. Likewise, splitting also doubles your bet, but in splitting cards you will have two hands instead of one to play with. Both doubling and splitting are only permitted on your first move or the first move if you've split cards. In most cases you cannot play two Aces once they have been split, and you will be permitted to double hands resulting from a split, effectively tripling or quadrupling your wager.

If your card values total more than 21, you bust and lose your bet. If you are dealt an Ace and a ten, you have blackjack which generally means that you win 1.5 times the amount that you wagered, depending on the casino and their payout rules (something to look at before you play).

When it comes to playing according to blackjack strategy, players can make use of a blackjack strategy chart for the particular game variant they are playing. You can memorise these charts or print them out and keep them next to you as you play. When playing online, many blackjack games have an autoplay option that is designed to play according to perfect strategy on your behalf. This is just another reason why you should be playing blackjack online , especially as a beginner.

To read these cards, look up the hand you are holding on the left vertical, and the dealer's upcard along the top of the chart in order to ascertain the best move for your hand.

If you prefer to commit blackjack strategy to memory, then these are the key points to remember in order to minimise mistakes.

When to Split in Blackjack

When it comes to blackjack strategy you will see many references to Soft hands or soft totals. A soft hand is any blackjack hand that has an Ace dealt as one of the initial two cards, so the Ace counts as a value of eleven to start off with.

A hard hand or hard total in blackjack is any hand that does not consist of an Ace from the start, or that is dealt an Ace which can only count as one instead of 11.