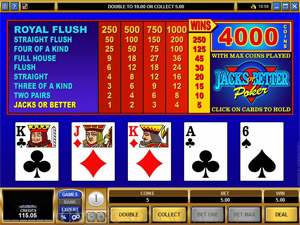 Jacks or Better is probably the most popular video poker variant due to the fact that it forms the foundation that players require to learn any other form of the game. In light of this, it is helpful to be able to be familiar with the key mistakes that the majority of players make when playing this game so that you can improve your own game play by avoiding these yourself.

Here we'll discuss the three most important strategy related mistakes that players make when playing Jacks or Better Video Poker so that you can avoid them and maximise your winning potential every time you play.

Mistake #1: Placing too much weight on open-ended straight draws

In general, players group flush draws and open-ended straight draws together in terms of importance. This is due to the fact that both have similar odds of hitting and are largely considered to be the two major poker draws. In the Jacks or Better game variant however, open-ended straight draws do not even rank better than a lowly pair due to the fact that they don't hit as regularly as flush draws and even if they do, offer a much lower payout.

It is therefore imperative that you realize the difference between the two types of draws and understand that they are not the same if you want to succeed at this game.

Mistake #2: Not understanding the connection between pairs and flush draws

In Jacks or Better games there are two types of pairs that you may encounter, high and low pairs. High pairs are regarded as Jacks or higher, while low pairs are considered to be tens or cards of lower value. Holding a high pair of cards is more favourable than a four card flush draw while a low pair is considered to be inferior to a flush draw.

You need to understand the relationship between these draws so that you can play your hand correctly when faced with a flush draw and pair.

Mistake #3: How Flush Draws are played

If you happen to draw a hand consisting of AsQsTs8s4d while playing Jacks or Better, like most players you'll probably think that the most obvious option is to discard the four of diamonds card. This however would be a mistake due to the fact that playing three cards to a Royal Flush is stronger than four cards to a regular flush.

This is often difficult for players to understand because it goes against intuitive thinking but part of the reason this play is successful is that it affords you at least two opportunities to pick up high pairs which adds a great deal of value to the hand.