At first glance craps tables tend to scare most new players due to the fact that there are just so many betting options that the game seems exceptionally complex. While it may seem that way, it really isn't the case when you learn more about the game.

Here we'll take a look at the basics of playing craps, from the bets to the rules and game play progression so that you're ready to hit the casinos and play this exciting game.

Craps tables at land based, online and mobile casinos all have the same layout. The only difference between playing in a brick and mortar casino or online is that online and mobile casinos allow you to play for free in "Free Play Mode" before you wager your hard earned cash. This is a great way to learn how to play the game in a non-pressurised, risk-free casino environment! 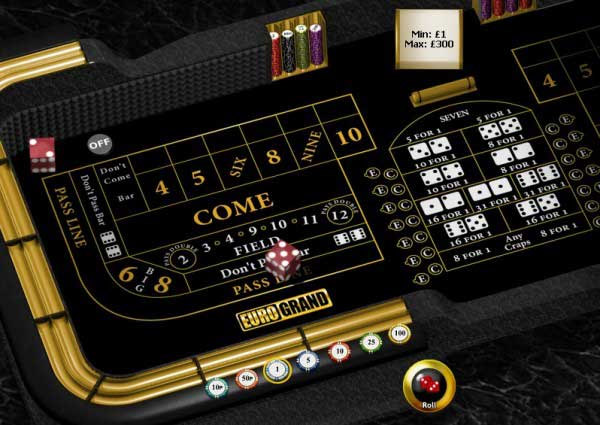 Play craps online or on your mobile at EuroGrand Casino

Before you learn about the game play progression, let's look at the types of bets offered in online craps.

Probably the most popular craps bet, the Pass Line is made on the come out roll (the first roll of the dice) and is a winning bet if a total of seven or eleven is rolled by the shooter. It loses if 2, 3 or twelve is rolled.

In the event that any other total is thrown, the point is established and if the point comes up again before a seven is, then the passline bet wins. If a seven appears, you'll lose.

Often referred to as "taking the odds", the Passline Odds bet is an additional wager that can be after a pass line wager is made and the point is established in the game. You will win on this wager if the point is rolled before a seven. The point determines the payout which can range between 2:1, 3:1 and 6:5.

Interesting this is one of the few wagers in the whole casino that has no house advantage so it's a good one to make if it's available to you in the game you're playing.

As the name implies, this bet is the opposite of the pass line bet. This wager wins if the come out roll totals two or three, and loses if it totals seven or eleven. A total of twelve results in a push. In the event of a push or if the point is established the shooter will roll the dice until a seven or the point is hit and the wager wins if a seven is thrown and loses if the point comes up. All wins pay even money.

This bet is also referred to as "Laying the Odds", and wins when a total of seven is rolled before the point. The payout will again depend on the point and is generally 1:2, 2:3 and 5:6.

The Come Bet is virtually the same as the Pass Line bet, differing only in that it can be placed at any time once the point has been established. You will win on this wager when seven or eleven are rolled and lose if two, three or twelve are rolled. Any other number becomes the point and you'll win if it is re-rolled before a seven appears. Come bets generally pay even money.

Again as the name implies the Don't Come bet is the opposite of the Come Bet, it can be placed at any time once a point has been established. When selecting this wager, you will win if a two or three is rolled and lose if the dice total seven or eleven. A twelve results in a push. In the event that the point has been established, you'll win if a seven is rolled before the point is and you'll earn even money on this wager.

In craps Place Bets are wagers placed on the numbers four, five, six, eight, nine or ten at any time during the game. You'll win if the number you bet on comes up before a seven. As you can see, this wager is similar to the odds bet, with the difference being that it pays out at a lower rate. Generally payout rates are as follows: 9:5, 7:5 and 7:6.

This craps wager is generally rare in brick and mortar casinos but found increasing at online casinos, it is the opposite of the Place Bet and can be made at any interval during the game. Your bet wins if a seven is rolled before your selected number.

Essentially quite similar to Place Bets, Buy Bets can be placed at any time during the game on any of the points, they differ from Place Bets in payout rates. When making this wager you'll win if a point is rolled before a seven.

Lay Bets are the opposite of Buy Bets, they can be placed on any point and you'll win if a seven is rolled before your elected point. Again casinos take 5% on any winnings these wagers incur due to the fact that the likelihood of a seven being rolled is high. Payouts range from 1:2, 2:3 and 5:6.

Big 6 and Big 8 wagers will win when a total of six or eight is rolled before a seven. You'll earn even money but these are the sucker bets on the craps table as making a Place Bet on six or eight will earn you much higher payouts.

You won't be able to miss this wagering option as it occupies the largest section of the craps table. You'll win when a two, three, four, nine, 10 or eleven is rolled and if the subsequent roll is a three, four, nine or eleven you'll win even money. If a two or twelve is rolled you'll earn 2:1 payouts.

When it comes to these bets you'll have four options, that the dice combinations will be two and two, three and three, four and four or five and five. You can place this wager at any time and you'll win if the hardways option you bet on appears before a seven is rolled and lose if it doesn't.

When betting this option you'll win if a seven is rolled and lose if any other number is. Payouts are 4:1.

On this wager you'll win if two, three or twelve are rolled and lose if any other number is. This bet pays out at 7:1.

When betting this option you'll earn a 30:1 payout when a twelve is rolled but you'll lose on all other numbers.

You'll win when three is rolled and earn a payout of 15:1 but lose on all other outcomes.

You'll win with 15:1 payouts if eleven appears but lose on all other rolls.

The horn bet in craps combines four wagers into one. To place this bet you'll place a chip in the middle of the two, three, eleven and twelve numbers on the craps table. If three or eleven is rolled you'll win 75:1, if a two or twelve is rolled you'll earn 5:1 and if any other numbers are rolled you'll lose.

Now that you know the various craps betting options, let's have a look at how the game plays out

To start, select the wager you'd like to make and place your chips on the appropriate section of the table. The shooter must place a minimum bet on the pass or don't pass line while other players at the table are also permitted to places their wagers.

The players then take turns rolling the dice. The person throwing the dice is called the shooter and their first roll is referred to as the "come out roll".

The shooter will continue to the roll the dice until they hit a losing combination:

If however the shooter rolls four, five, six, eight, nine or ten on his/her come out roll, then the value of the dice becomes the point and the shooter continues to throw the dice until the point number or a seven appears.

If the point is rolled, the pass line bets win and the don't pass wagers lose, and vice versa if a seven is rolled.

If a shooter loses, then the next shooter will take his/her turn to roll the dice and the round starts again with his/her come out roll. All players have to place a minimum bet and the whole process described above repeats.