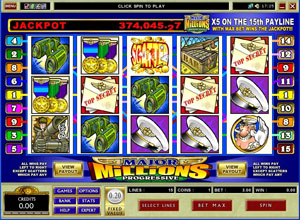 The Major Millions Progressive Jackpot Slot is one of the all time Microgaming greats. It originally appeared as a 3 line game in both standard and multi-spin versions and was later launched in a 5 Reel, 15 pay line, Progressive Video Slot format which has been delighting avid slots enthusiasts ever since.

With an American military theme complete with tanks, jets and warships and all the other army paraphernalia, this game really packs a punch! Featuring Major Millions himself as both a wild and multiplier symbol who triples payouts on the combinations he completes, as well as scatter symbols which allow for additional wins, the thrills never end.

With a jackpot that starts at $250,000 and has reached well into the millions a few times, at $3 a spin to qualify for the jackpot prize it's no wonder it appears on the list of top casino games across the web.

So if you're in the mood for a progressive slot that offers major fun and rewards, then join Major Millions for the experience of a lifetime at Spin Palace Casino today.