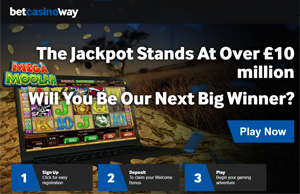 Will you be the next Mega Moolah Millionaire?
Play now at Betway Casino

When it comes to online progressive jackpot slots, the Mega Moolah progressive online slot is undeniably a legend in its own time. This slot has created more winners than any other online so it's little wonder that it's often referred to as the millionaire maker.

Mega Moolah paid out a record-breaking win of £13.2 million in October of 2015 to lucky UK soldier Jonathon Heywood and just six months later the jackpot ticker has passed the £/€/$10 million mark yet again!

This has meant that Microgaming powered online casinos are seeing large volumes of players flocking to try their luck and potentially hit the jackpot of dreams and change their lives forever.

If you haven't yet played the Mega Moolah Slot, here's a quick overview of the game for you...

The original Mega Moolah progressive slot is a 5 reel, 25 payline African Safari themed game with a Wheel of Fortune element. Lions are wild, doubling your winnings and scatters come in the form of head-hunter trophies which activate up to 15 re-triggering free spins with 3x multipliers on all your wins for the duration of the free spins feature.

To do that you'll have to activate the Wheel of Fortune feature within any of these games. This wheel gives you the chance to win one of four jackpots: Mini, Minor, Major and MEGA, the latter of course guarantees you a win of a minimum of £/€/$ 1 million (the win will be awarded in the currency you elect to play in when opening an account at the online casino you play at).

And if you're not totally convinced and excited, here's a list of players who have cashed-in on the Mega Moolah millions over the years:

As you can see the list is a substantial one - will your name appear on top next or will you choose to remain anonymous? Either way a jackpot of more than 10 million is definitely a prize worth playing for.