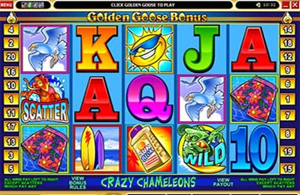 When it comes to online slots you may have read some reviews where the author notes that placing a side bet causes the bonus features to occur more frequently. Being the super-savvy slots player that you are, you may have done a double take. After all, don't Random Number Generators (RNG's) govern slots results? How then can the game or RNG be changed to make the bonus features occur more frequently by a single side bet?

That's a very good question! The answer is that the game itself is not changed to increase the bonus triggers, rather the feature is activated by the side bet and when that happens, the mystery trigger which works with a unique set of random numbers than those in the main game comes into play.

You'll generally find mystery triggers in progressive jackpot slots with multi-level jackpots but these triggers can also be used by software manufacturers in bonus events, so it's possible to use them for both bonus features and jackpots in the same slot machine.

Let's look at how these work. If you're playing a slot that has a side bet option, but you decide not to play it, then you won't be eligible for the progressive jackpot but you will still be able to play the bonus games when they are triggered by the three active bonus symbols appearing anywhere on the reels.

If in the next round you decide to make the side bet, the RNG for the base game will continue to operate as usual and the bonus games will still be activated when the three bonus symbols appear on the reels. However, when you place the side bet, more random numbers are activated, with a number being generated for each progressive and bonus event. In mystery progressive slots you don't need the winning combination to appear on the reels to in the jackpot prize or to go to the mystery bonus game, they are activated randomly which is why they're called "mystery" events.

Due to the fact that the bonus game is activated whenever the bonus symbols appear on the reels to trigger it as well as when the mystery bonus is triggered, those who place a wager on the side bet option will inevitably enjoy more bonus events than those who only play the standard game.

Since the inception of video slots, software developers have been developing innovative ways to encourage players to make larger wagers. Of course, the method once used on 3 reel slots where there is a disparate jump from the base game rewards to the top jackpot when you bet the maximum number of coins didn't prove to work as well on video slots which were developed with entertainment in mind and boast more paylines and a tendency amongst players to bet only one or two coins per line. And so, adding progressives and an increasing number of bonus features awarded by mystery triggers when the player makes a side bet were an effective way to achieve this goal.

Still, the RNG is very much in play and results are still completely random, making them completely fair (or as fair as any game with a house edge can be) while being tons of fun to play.